Hi faithful Shenanigans followers and newbies to the blog!

It seems I have a problem keeping you all updated frequently. A real problem.

And it’s not for lack of stories.  Much, much, MUCH has been going on in the dating life of this 30-something woman living life in Los Angeles. And life is super busy.

The last thing on my mind has been to put some effort into writing down my stories, and I’ve realized:

But that’s a pretty common (sad) excuse that makes me sound like an uber-lazy blogger, so I decided to dig deeper.

I actually love to write, and I love that you all love to read these stories.

So what’s the deal? Why am I leaving ya’ll hanging on the hook?

And THEN, I realized:

1. I’m (still) super paranoid that one of the guys will find out about this blog and I’ll feel like I betrayed them by sharing stories…even though no names are shared, not even mine.

2. I’m tired of the broken record of “Welp, it didn’t work out with him, because…”

It’s probably more this second reason that brings my heart to a hult.

It’s exhausting sometimes. The odds are not good here.

And even though there are MANY happy times and highlights along this glamorous journey of life and being single in the city, it’s tough, too.

Now, granted, I of all people understand that finding the love of your life doesn’t happen overnight.  Heck, if I had a dollar for every time I’ve written that to someone in the trenches of dating I’d be able to retire.

Or at least buy you all a steak dinner.

So I know that meeting a lot of guys until I find that “keeper” is par for the course.

Just sometimes I wish I could telepathically share the juicy scenarios, sexy escapades and even the boring mundaneness (is that a word?) with you. Instead of crafting a well thought-out blog. 🙂

Ok, enough whining.  Please accept my apology and we’ll move right along so I can address the title of this blog post…

After 2 weeks of guy after guy flaking on me, I had put my foot down (instead of shoving it up someone’s very rude, unaware, narcissistic ass).

Typically guys don’t flake on me, and I never let it get to the point of me sitting alone at a restaurant but something has been in the water lately.  A lot of them seem to have no respect for my time.

See, I’m a planner. I like to know what time and where we’re meeting up.

I’m not a control freak,  though.  Mind you, I didn’t say I need a minute-by-minute itinerary that needs to be approved first before I accept your invitation.

No, I’m just talking about getting the basic details so I can plan accordingly.  For example,

That isn’t difficult, is it?

No. No, my friends.  That’s not difficult.

But I swear it’s been like pulling teeth to get guys here lately to make a plan. Gah!

Here’s what I get (via text or message) after we’ve exchanged several messages and have figured we’re both attracted to each other and want to meet up:

“Yeah we should definitely meet up sometime soon.  I know a great margarita place in the middle of the two of us.”

Now, he obviously did want to see me. He knew we both like margaritas and that we both live in two different towns.  So he made the effort to put those two thoughts together and come up with a place, yet he mentions no time. No specifics.  No name of the restaurant.  No asking.

So I get frustrated and figure he’s busy and/or not that interested.  If he was, he’d reach out and MAKE A PLAN.

Am I being unreasonable? This is basic Dating 101, yes?

He’d been trying to see me for a second date for a good 6-8 weeks now.  Our first date was the night before I ended up the next day in the hospital for emergency surgery, so with the recovery time added up, I wasn’t really available. But he was persistent and kept in touch.

Fast forward, I was all better and back to single and mingling so I reached back out to let him know I was good to go and wanted to see him again, too.

He’s excited and so he eventually asks if I’m available that Friday.

I let him know I’d love to know the details of what time and where we’d meet.  He says he’ll let me know.

And then hours pass. And then days.

And before you know it, it’s Thursday.  So I reach out to him to see if we’re still on.

He lets me know that we’ll do dinner at 8pm and sends me an address of a restaurant.

So it’s Friday and I reach out to confirm during the day.

What kind of date is that?!

I waited until I arrived home to respond:

“No. Thanks for letting me know.”

He senses I’m pissed. He doesn’t know that I turned down dinner plans earlier in the week with someone else because we had plans already.

Me: “Then why the hell did you schedule a dinner date when you knew you had to work?”

The story gets worse because he actually reached out the next week and the SAME thing happened, but probably worse. 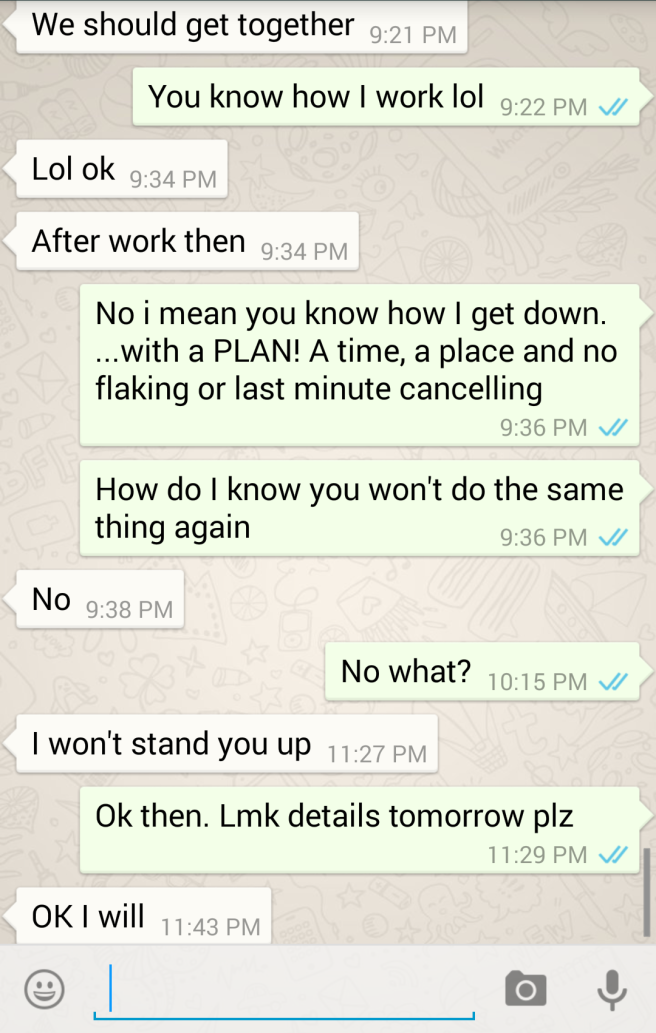 And he NEVER RESPONDED.

I haven’t heard from him since, actually. And Lord knows I’m just waiting for him to pop back up like everything is all good. Ha!

But THIS ONE…this last example. ..is the one that really takes the cake.

So those of you who I’m friends with on Facebook may recall a picture of me all giddy and dolled up a few weeks back. I had snuck a selfie while on a date with a Facebook Software Engineer.

Needless to say, we had a VERY fun weekend together, basking in the sun of Laguna Beach as we got to know each other better.

A few failed attempts to make dinner plans that next week due to busy work schedules and us living pretty far apart (like, a good 2 hrs in traffic), we finally lock down a time on Thursday.

He asks me to pick a place and make 7:30pm reservations.

Dang. No one makes reservations in LA unless you’re serious and going somewhere nice.

So I’m excited. There’s commitment there.

“I just checked. You’re good actually.  You’ll even make it before our 7:30pm reservations…”

We hang up and it sounds good! I’m more excited now.

So some time passes and I text him to check on the traffic.

So I call him.  After all, he’s driving.

I wait awhile longer and notice the clock ticking away toward 7:00pm, and then eventually…it’s 7:15pm.

I’m at home, still in my dress and heels I had worn to work that day. Waiting.

So I call him again, and…

I send one more text at 7:20pm letting him know I was going to have to call the restaurant to cancel our table.

At 7:20pm I dial the fancy French restaurant and cancel the reservation with MY name on it.  I feel like a shmuck.

I lie and tell them we got stuck in traffic. They’re sorry we won’t be able to make it.

And then I hang up, change clothes, and storm out of my place.  I go on a very fast-paced walk. To a pizza place that has wine.

And I drink and eat pizza and stew.

Who literally says “I’ll see you in a bit” and then never even shows up, let alone texts or calls to let you know they can’t make it.

And here’s the kicker:

We met on Plenty of Fish. Every time your matches log in to check a message or what have you, it says, “Online now” under their picture.

While I aggressively chew my pizza, I log into POF.

Guess who was “online?”

Not only did he blow me off and totally flake on me, he’s talking to other women when we had plans at that exact moment.

So, ladies and gentlemen.

That weekend I deleted all of my dating profiles (besides eHarmony) and threw up my hands.

The audacity and total lack of respect for my time and effort in really wanting to get to know someone has not been equally matched.

I’m no longer interested in meeting people who I can’t tell right away if they’re serious about meeting and have some decent sense of character and integrity.