I learned so much this weekend.

First, I learned that as much as The Architect intrigues me, it’s not a match.

Without divulging too much detail about his personal life and continuous drama with the mother of his two children, I’ll say this much:

We all have baggage.  We just have to decide how much strength we have to carry a heavy (or lighter) load.  And when it comes to a very fresh, very new potential relationship, this includes you and how much of their baggage you choose to deal with alongside them.  Especially when you’re close enough to be trusted with and learn all of the craziness happening from a pretty early start.

Long story short, the level of his “baby mama drama” is like an 11 on the 10-point scale.  And even though she’s this famous blonde Hollywood-type you’ve most likely seen on a TV show (a Dr. who talks about relationships of all things!), according to The Architect she’s bat-poop cray cray.  A fraud and total hypocrite who is somehow “obsessed” with Mr. Architect, as he says.  The stories he shares with me about her are like nothing I’ve heard and it makes me appreciate the people in my life who are SANE.

They’ve not been together for over 6 years but as a very active dad in his two daughter’s lives, it’s inevitable and almost unavoidable drama for him on a daily basis.

I learn more and more during our date this weekend:

After not seeing each other for a month or so, The Architect invites me out for brunch.

I was curious to see how he was doing (new developments for him on the work side of things) and we do have a special connection.

We spent a few hours in the warm, sunny SoCal city of Manhattan Beach.  After we ate at Ocean View Cafe, we walked down to the ocean. 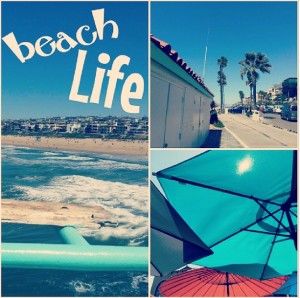 He shared with me the latest gripes and groans about everything going on (his ex, his latest client who won’t pay his full rate, etc) and I found myself feeling sad.

Sad for him because it’s never any fun when one parent uses the kids to manipulate the other parent.  Sad for him because I know he loves his daughters and his ex puts so much unnecessary strain on those relationships, and after 16 years of it, he’s TIRED.  And finally, sad for him because the majority of what he talks about now is almost all negative.

I’m a glass-half full type of woman and maybe when I’m 56 I’ll be a Negative Nancy, too, but I certainly will do everything in my power to NOT be!

In addition, I can’t STAND people who are negative.  Or not just negative, but who only talk about the bad things in life.   He might speak about actual facts of a situation that he can’t do anything about, but there’s always light to find in a situation, too.

I much prefer to keep things positive, happy, light-hearted and fun.

Much of what he talks about is just repetitive, too, and I’m not a fan of a broken record.

I AM a fan, however, of acknowledging the bad stuff but then changing things up and to start focusing on the positives we see right in front of us.

He knows I have plans later in the day (another date!…although I didn’t share that), so we head back. I drop him off.  We hug and he gives me a kiss goodbye.

It didn’t feel “final” or anything, but in my heart he’s definitely moved into The Friend Zone.

Which, of course, SUCKS because now instead of getting it for free, I’ll probably have to pay him to build me that dream house, in which I won’t be living in with him.  Sigh.

2 thoughts on “UpDATE: The Architect”